A 12 hour sleeper train from Hanoi later and we were in Huế. We were only staying the night before leaving for Hội An, so we hadn’t done much research beyond it being Vietnam’s former capital and an important site during the Vietnam War.

Keen to get out and see as much as we could in the little time we had, we dumped the bags at our hotel, the Google Hotel (surely named for SEO purposes alone!) where we were welcomed with fresh fruit – much needed after an evening of crackers and sesame candy. Hiring two bikes from the hotel (10,000 VND or 30p each for the day) we set out.

Most of the early afternoon was spent cycling round town, checking out the local pagodas. It was 5pm when we arrived at Tu Duc’s Tomb and Palace. Luckily we bumped in to a  couple who were leaving and who hadn’t had their tickets checked at the gate, so they sold them to us for 100,000 VND – they were meant to be 80,000 VND each, so that was a few more pennies in the bia hoi jar.

Built 1864-1867, it served as Emperor Tu Duc’s residence and office and was also home to over one hundred of his concubines. With so many mistresses, plus a legit wife, it’s a surprise he had time to contemplate his own mortality, but Tu Duc had a twenty year head-start in planning for his death, designing his tomb and writing his own epitaph. 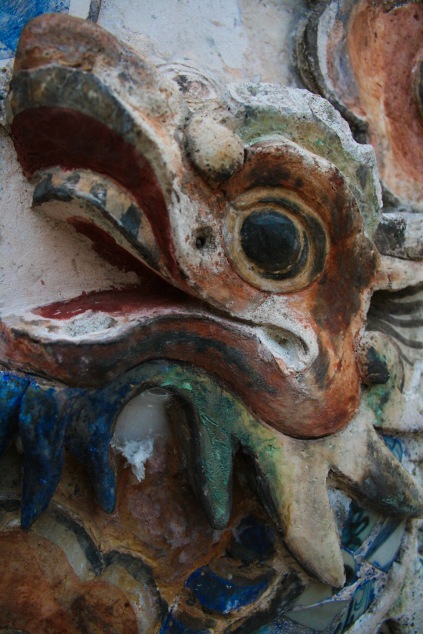 First tip from the trip: arrive about an hour before closing to avoid the crowds. After 20 minutes we were the only people left in the place. It was peaceful and felt like we were discovering it for ourselves, rather than following the throng. You’ll still have plenty of time to get round and see everything, but without someone stumbling in to every photo you want to take.

We cycled back along the Perfume River. The riverfront parks, that had been deserted earlier, were now slowly filling with kids out of school, tired workers collapsed on benches in search of a cool breeze and couples watching the sunset. We stopped to watch it ourselves, and the silhouetted swan pedalos bobbing around on the river.

Another thing we learnt from our brief time in Huế, the street food experience isn’t as varied as Hanoi. Don’t eat Bun Bo Huế unless you have a strong stomach or a penchant for offal. 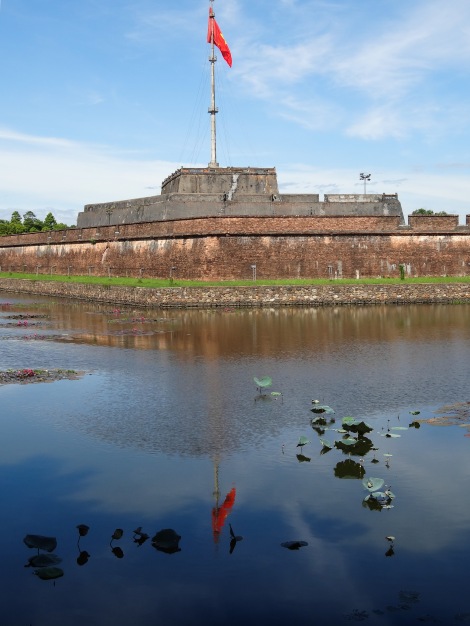 The next morning we were up early (6am) to visit the Imperial City, a walled fortress and palace in the former capital. First thing in the morning worked out just as well as last thing at night in terms of bypassing the coach tours. We had a pretty clear run at the Citadel, wandering around the Purple Forbidden City (more concubines) temples and even the Imperial Tennis Court. What struck us was the amount of war damage still visible. In 1968 Huế was at the centre of the Tet Offensive as the Viet Cong and North Vietnamese Army pushed to capture the city. It was also heavily attacked during the 1940s and the war with France. Of 160 original buildings, only 10 remained. So most of the info plaques in front of piles of rubble end with “…damaged in 1968.” This was the first place in our journey where the scars of the Vietnam War were still so clearly visible (but it wouldn’t be the last).

This was all we had time to see of Huế, which I don’t think was too bad for just over 24 hours. Over all, I’d have to say I was underwhelmed by the city. It was busy and noisy and crowded, but it lacked some of the charm, some of the vibrancy of Hanoi for me. Granted we had only explored a small section of the city and never really got over to the east side at all. The Citadel and exploring Tu Duc’s Tomb made the stop worthwhile, but it wasn’t somewhere I felt we could sit and watch the world go bye. One night was a good move, more time for Hội An.

2 responses to “Dodging the crowds in Huế, Vietnam”