Anyone planning a trip to Cambodia will, almost inevitably, plan a few days in Siem Reap. Home to the Angkor Archaeological Park, otherwise known as Angkor Wat, Siem Reap has grown up as a tourist centre over the last fifteen years – unsurprising when you consider that these temples are Asia’s most-visited tourist attraction.

We found the results of Siem Reap’s rapid growth to be mixed, to say the least. Arriving into the city via the sleek new airport, we were filled with excitement, but the tuk tuk ride laid on by our guesthouse revealed a myriad of soulless hotels and restaurants offering any cuisine but Khmer.

Our first evening foray into central Siem Reap from the relatively quiet Wat Bo Village area, in which we were staying, resulted in an incredible culture shock. ‘Pub Street’, one of the main arteries of central Siem, felt congested and alien, almost like a slice of Kavos in Cambodia, filled with Western bars and pizza. Reluctant to spend US dollars (the currency of choice here) on ‘Western’ food in obnoxious surroundings, we retreated to a small Khmer restaurant at the eastern end of Pub Street, Khmer Home restaurant, where we had a nice meal of traditional fried noodles and our old friend, morning glory. The proprietors were keen to speak English with us, telling us about Cambodian life and comparing Vietnam, Cambodia and Western culture.

This early experience neatly sums up Siem Reap: it’s easy to find something safe, but to see real Cambodia here, you’ve got to go looking. After the immersive experiences that we had in Vietnam with the Easy Riders and in bustling, alien cities like Hanoi and Hue it was a lesson we hadn’t expected to have to learn. We returned to central Siem Reap with greater success in later days, discovering some treasures. However, our first real adventure began bright and early (very early!) the next morning. 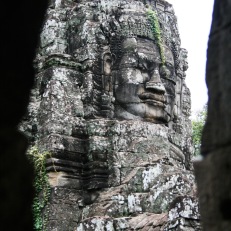 Keen to see a sunrise over Angkor Wat, we set out from our guesthouse on rented bikes at about 4:30am, hoping to get into the park as early as possible and to maximise our quiet-time experience. We made it to the Angkor Wat complex by 5:20am, settling down on the quieter right-hand side of the Wat, ready to enjoy a beautiful sunrise – getting up early doesn’t always mean beating the crowds, but if you stick to the right hand side the views are just as good but it’s a slightly less popular spot so you’re less likely to have someone wandering in to your shot.

The weather had other ideas and clouds prevented our getting that perfect Angkor sunrise photo. But the changing light over the enormous temple’s towers was awe-inspiring. It’s difficult to comprehend the scale of the complex until you get up close. Inside, the incredible craftsmanship and detailed carvings was truly unlike anything we had ever seen before, perfect in their uniformity, intricate and beautiful. 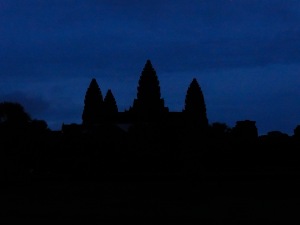 This was as good as it got, but still quiet eerie

Beyond Angkor Wat, the 400 square kilometre park is home to numerous ancient Khmer capitals and a wide variety of temples. We decided to cycle the ‘little’ circuit, heading east from Angkor Wat to Banteay Kdei, a large ancient monastery made up of a series of long chambers. This site is undergoing a lot of restoration work, but is well worth a visit, especially for the lush green walk towards the main entrance. Across the road from Banteay Kdei is Sras Srang, the enormous former royal bathing pond. After an early start this was a great spot to sit and relax, especially on a warm day. Some of these smaller (in terms of notoriety and by no means size) are quieter and lack the huge tour groups which focus on the ‘big three’ of Angkor Wat; Ta Prohm, Angkor Thom and the Bayon.

Our next stop was Ta Prohm, the temple made famous by Tomb Raider. Here we were struck by the sheer power of nature, trees reclaiming the jungle by growing through masonry and parting walls from their foundations. Wandering around the outer walls of Ta Prohm, away from most other visitors, felt as close as we’re ever going to get to discovering ruins lost in the jungle – every kid raised on Indiana Jones films’ dream, right?

So many steps, so much to take in!

Finally, we rode our bikes over a bridge flanked by mythical soldiers holding two giant Naga. through the striking Victory Gate and into the centre of the largest complex, Angkor Thom, the site of one of the park’s most famous temples. The Bayon is immediately recognisable for the 216 stone faces that adorn its towers and walls, thought to closely resemble the king who commissioned its construction, Jayavarman VII. Angkor Thom’s most striking edifice is the Baphuon, built to resemble Mount Meru, a Hindu holy place. If you can deal with narrow, steep steps it’s well-worth climbing to the penultimate level of the temple to take in the view.

Our final experience of Angkor Archaeological Park bordered on the surreal. As we cycled out of the park we passed a huge group of young people, all in white t-shirts, dancing to blaring music. We wondered how this could go on right across the way from Angkor Wat, the treasured symbol of the nation. As it turned out, this was a warm-up for a political rally, as dozens of trucks filled with chanting supporters of the ruling Cambodian People’s Party overtook us on the way back into Siem Reap.

Having spent a long day on our bikes, we decided that we’d seen enough of the Angkor Archaeological Park for our trip. Although there are tons of temples we missed out, we wanted time to explore more of Siem Reap, keen to find some evidence of modern Cambodian culture.

The next morning we went to peek at three more modern Buddhist pagodas: Wat Bo, Wat Damnak and Preah Prom Rath. Our local temple, Wat Bo, was the most rewarding. As we wandered around the tranquil Wat Bo village surrounding the pagoda, we were met by an elderly monk, who signalled that he would take us inside the previously locked main building. Inside the dark, airy building, there was a huge golden Buddha looming from the far end of the space and beautiful paintings covering almost every inch of the high walls.

Hanging in out in our local Wat

Wat Damnak and Preah Prom Rath were equally tranquil spaces, albeit more heavily populated with orange-robed monks. Again, we spent some precious minutes sitting in Wat Damnak’s grounds listening to prayers being played over tinny speakers. Preah Prom Rath was most notable for its sculptures and ornate central temple roof.

Although it was tricky to find at first, touring the pagodas gave us a much better sense of Siem Reap and a small taster of Cambodian life. 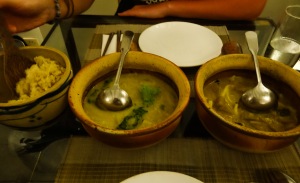 Went we weren’t being intrepid temple explorers, we found a fair few spots to watch the river and take a breather. These are our top four:

1. Blue Pumpkin – A Cambodian chain of ice-cream parlours providing some great flavour combinations: ginger and black sesame was a favourite. They offer a ‘tulip’ presentation for maraschino cherry connoisseurs.

2. Body Tune – This well-regarded spa is part of a boutique chain based in Thailand. We had a 60 minute Thai massage and can safely say that it was the best massage experience we’d ever had. Being stretched, twisted and lightly punched has never been so relaxing.

3. The river – We whiled away half a morning sitting by the river, sipping on pineapple juice, enjoying the quiet beauty and hanging with the locals on the west bank.

4. Sister Srey – This Australian-owned cafe doesn’t tackle Khmer food, but it does provides a fantastic alternative to the over-priced, low-quality Western spots a few streets away. With a quiet ‘karma library’ upstairs, wifi, good coffee and a menu chock-full of tasty treats (try the sweet potato wedges and fruity ice shakes, they’re amazing) this is a great spot for weary travellers to chill out. 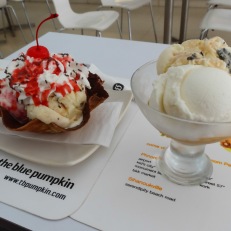