After some serious temple hunting in Angkor Wat, we were more than ready for some chill time. Koh Rong was just the medicine. But before we got there we had the (dis)pleasure of experiencing Sihanoukville. 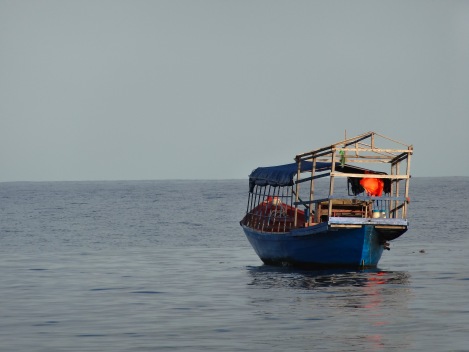 What was once, I’m sure, quite a charming working port city, has now become Cambodia’s Blackpool. We arrived after a pretty hideous night bus ride(torrential rain, cracked and leaking windows, squished together on a top shelf whilst the bus careered through potholed country tracks for over 10 hours) in the early hours of the morning, so admittedly we weren’t in the most receptive of moods. After finding a café for breakfast and a quick baby wipe shower, we thought we’d see what Sihanoukville had to offer and what attracted so many backpackers.

Turns out not much. Tacky bars and restaurants competing for the cheapest full English fry-up, tour shops and tattoo parlours. Turns out that over the weekend of the election, which this was, bars aren’t allowed to sell alcohol in an attempt to reduce the risk of violent clashes, which seemed to have pushed quite a few backpacker noses out of joint. The dog turd floating on the beach was the last straw, and we headed for a café to sit in for a few hours before our ferry left this hell-hole for what we hoped would be island paradise.

Finally, 1pm came around and we jumped in the back of a pick-up truck and whisked away to the ferry port. An hour later and we’d left the shores of Sihanoukville far behind.

Koh Rong is beautiful. It was slightly busier than we expected. By that I mean there were six bars, whereas the photos made it look like there’d be two max, so in no way packed or over-run with cheap western restaurants. We stayed in Monkey Island, which is right near the end of the ‘strip’ right on the beach – which had about five people on it – bliss! 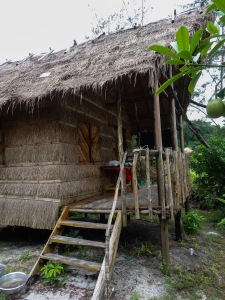 Monkey Island was perfect. Great food (Khmer, thai and western) really friendly staff (get Ti to make you a mojito, they’re amazing!) and our bungalow just summed up what our paradise retreat was all about, lazing in hammocks on the porch watching the water buffalo walk up and down the beach. In fact we stayed in Monkey Island every night, playing chess at the bar, cuddling the cute puppies and drinking with the manager Paddy.

It took us a while to calm down and not feel bad about being up early to go explore, but that was exactly what we’d planned our stay for, to relax and take it all in. Hell, we walked the length of the beach and back! There are waterfalls you can check out on Koh Rong, but after seeing so many in Vietnam we weren’t fussed and chose to take it easy on our patch of beach outside the bungalow. Make sure you pack the mosquito spray though, those buggars are vicious out there, and it also helps keep the sand flies at bay.

Our horrible few hours in Sihanoukville seemed like a distant nightmare and made us appreciate Koh Rong all the more. We returned well rested and ready to take on our next adventure, Kampot.

5 responses to “Heaven and hell: Sihanoukville and Koh Rong”