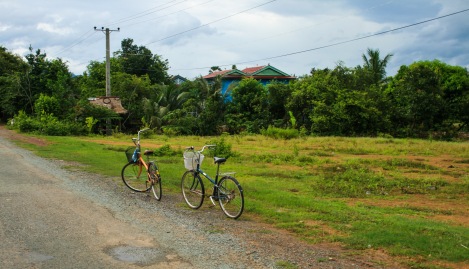 Having seen what a tourism boom looks like in Cambodia, passing through Siem Reap then Sihanoukville, Kampot was a welcome relief. Slightly off the tourist trail, this quiet riverside town was charmingly tranquil and easily manageable in the day and a half that we had to explore it.

We stayed at Samon’s Village, slightly out of the centre of Kampot town, on the opposite bank of the river from the main town. The hotel is designed as a cultural village, with plenty of greenery, small straw huts and lots of palm trees to lounge in the shade of. Although we arrived past 10pm (after a cock-up with the taxi transfer in Sihanoukville and getting royally ripped off just to get the hell out of there) there was a warm welcome and an offer of cereal or yoghurt to eat, despite the kitchen having shut a good few hours ago. We politely declined and feasted on coconut candy, pineapple juice and crackers. 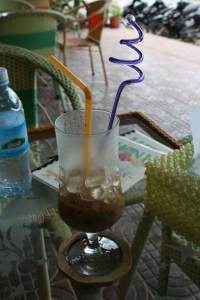 Our bungalow was basic, but very nice and clean, despite the bird-sized moths that made their way in to our room on a couple of occasions. To be honest, after shared bathrooms in Monkey Island, stumbling to them in the dark and having to shower in our swimsuits, we were just happy to have ensuite of any kind!

Only having a single full day in Kampot, we decided to rent bikes from a nearby hotel-cum-travel agent. We hopped on two fairly serviceable bikes and thrust out towards the rapids at Teuk Chhou that we had heard were a favourite of locals. Well, we ‘thrust out’ about fifty metres before it started raining. This was to be a recurrent theme over the next half an hour as we: a) ducked under cover b) waited by the roadside c) tentatively ventured out d) repeated steps a-c.

Finally, we decided to head into town on our bikes to explore various drier options before striking out again for the rapids. It soon stopped raining and we managed to take in some of Kampot’s sights from our rickety bike seats. 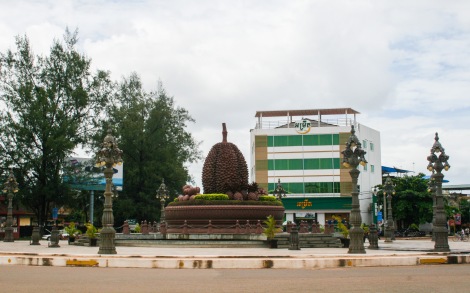 The tourist map that we’d been given at Samon’s highlighted a couple of monuments in town. As it turned out, each of these monuments were more like a series of roundabouts – an exotic Milton Keynes. The largest and most bizarre roundabout is host to a giant sculpture of a durien fruit, grown locally and one of the area’s biggest exports. Others featured a statue to commemorate the millennium (a giant ‘2000’ with a seagull perched on top) and a monument to salt workers. Kampot was once famous for it’s salt and pepper production, and the roundabout sculpture was nice enough, the nicest salt-worker-monument we’d ever seen anyway. 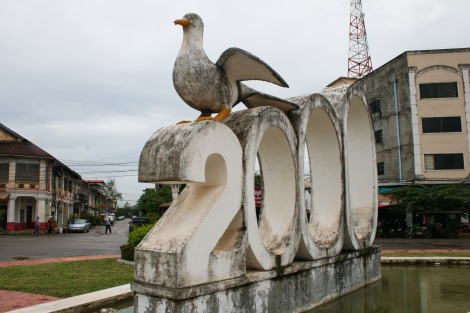 Kampot really came into its own once we reached the riverbank, where the mayor’s swanky residence sits. The views across the river towards the rolling hills highlight just how close the town is to the countryside – a world away from the sprawl of Siem Reap.

The town market is a compact ball of hustle-bustle: stalls sell everything from pjs to famous Kampot pepper. The walkways between the stalls are barely covered by tarpaulins and the gutters are full of trash. It was here that we felt like we got our first real glimpse of everyday Cambodian life, sharpening our elbows to bag a lunch spot and haggling with stall-holders.

After a few laps of the market and a refreshment stop at the famous Kampot Pie and Ice Cream Palace we managed to pedal our bikes out to Teuk Chhou rapids – a fair old schlep out of town. The rapids themselves were pretty disappointing because the water was so high that large sections were under a fast-flowing river. It’s a popular spot with local however, lounging in hammock cafes set up along the river. On a hot day this would be a pretty sweet spot to chill out at.

Locals washing their clothes in the river

Our favourite spot for relaxation was back at Samon’s, in the bar-restaurant area overlooking the calm river, drinking ice cold beers and watching the light fade. It was magical moments like these that confirmed our feeling that we’d barely scratched the surface of Cambodia. Had we had more time we would have definitely spent longer, maybe reaching out to some of the south-east (perhaps take a trip to Kep) or the deserted French hill-station to the north. Alas, we were on the ‘home straight’ and had to depart for Phnom Penh, the final stop on our Asian adventure.