During my time in Australia I’d been aware of a certain rivalry between two of the country’s biggest cities. Most of my Australian friends told me that Canberra was bottom of the rankings, a capital for convenience sake, not for style or substance. However, the debate between which was Australia’s number one city, Sydney or Melbourne, is still very much undecided, with lots of people routing for their home turf. So I decided to head to Melbourne to make my own mind up. Briefly, these are my thoughts on both exciting cities. 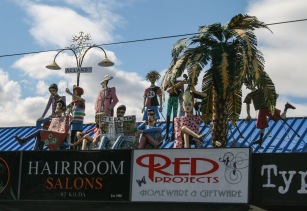 This diddy found me in a cafe in Mornington 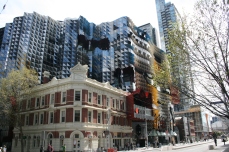 Love the mix of architecture 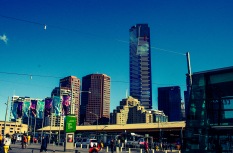 I lost a shoe at the airport upon arrival. My brand new leather Converse were the only shopping extravagance I’d made on this trip so far, so I was little annoyed at having just thrown my cash away! So not a great start to my Melbourne experience. Nevermind, I got to St. Kilda to stay with some friends and swiftly headed to the pub to drown my sorrows. I spent about a week in Melbourne over all. I found it to be quite a chilled out city, as much as cities can be anyway! I didn’t feel half as much of the aggressiveness that I experienced in Sydney, but being based in St Kilda and chilling on the beach probably helped, it may have been a different story if I’d spent all of my time in the CBD. I also went out and spent a few days in Mornington, a pretty small suburb with a pretty beach and some cool bars – I’d recommend God’s Kitchen, a watering hole set in an old converted church (hipster crowd alert). 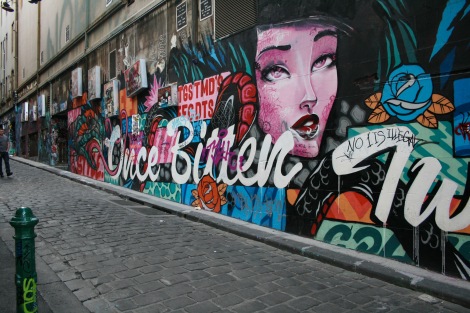 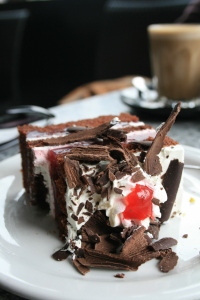 Acland Street cakes are a must!

I’ve already explained my love of Sydney in a previous post (‘6 Reasons to Love Sydney’). As for things I wasn’t so keen on, I’d have to say there wasn’t much, apart from the fact that a lot of areas were clearly geared up to lure in the tourists. For example, I was a little disappointed with Bondi Beach, but there are plenty of other sandy surf alternatives. But then what can you expect in one if the most iconic cities in the world?! I also wasn’t comfortable walking around some parts of Sydney on my own at night, not that this happened often, but again, it’s a big busy city and as long as your sensible it’s fine.

Overall, I enjoyed exploring both places. Melbourne seemed much more laid back, yet the hustle and bustle of Sydney was a massive part of its charm. I’d have to say, that for me, Sydney only just beats Melbourne in this closely fought battle – and that comes largely down to pot luck. I flew in to Sydney first, straight from Phnom Penh, so I will always associate it with my first impressions of Australia, staring at two of the most icons structures in the world the Sydney Opera House and Harbour Bridge. I’m sure if I’d have arrived in to Melbourne first and been faced with it’s impressive skyline I’d have had similar emotions. But ultimately, Sydney is for me a special place, the beginning of my Australian adventure.

5 responses to “Melbourne vs. Sydney”