What springs to mind when you think of Southeast Asia? If you’re like me then Thai food, glittering temples, huge Buddhist statues and friendly smiling faces. Although not lacking in any of the countries I visited in the region, time spent in Malaysia caught my cultural preconceptions completely off guard.

I travelled here knowing very little about Malay culture. What surprised me most was how much of a melting pot Malaysia is. From Chinese, Indian and ethnic Malay, to an enduring sense of colonial legacy, every corner has a different story to tell. Noticeable in Singapore, it was in Penang that I really got schooled in Peranakan.

I mean, who’d ever heard of Baba Nyonya? To me it sounded like some friendly old Grandma who might make lots of tea and force feed you steamed buns. Turns out it’s is another term for Peranakan, which is the name for the unique culture that emerged during the 15th and 17th centuries amongst immigrant Chinese communities who settled in the Malaysian Peninsula. They formed their own traditions, art and cuisine that encompassed Malay and British colonialism, whilst retaining some Chinese influences, creating an entirely new culture and adding to the rich complexities of Southeast Asian life.

To understand the lifestyle of this immigrant community finding its feet in a distant land, head to the Pinang Peranakan Museum in Penang. Here they have rebuilt the home of a rich Baba, typically a wealthy trader (his wife or female counterpart would be known as a Nyonya). Peranakans usually had Hokkien (Han Chinese) ancestry, but some immigrated from Chaoshan and Canton, and were of mixed ethnicity, part Chinese part ethnic Malay. 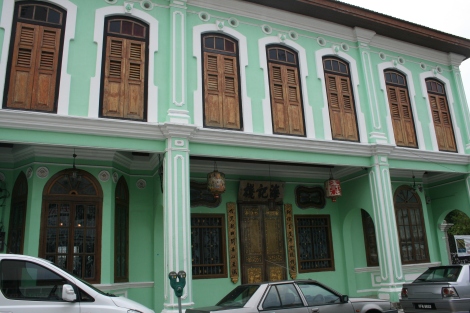 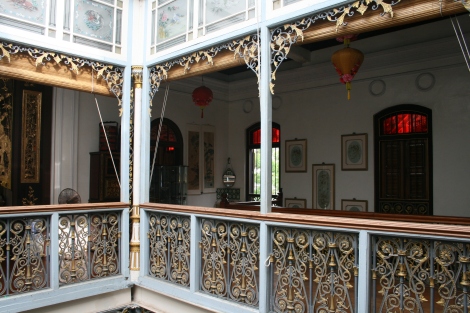 The museum is a beautiful home and representation of what life for these Babas and Nyonyas was like in the early 20th century. Built at the end of the 19th century, the house has been restored in all its opulent glory and includes more than 1,000 artifacts from the era. The Chinese style courtyard house is so intricately designed, with iron staircase railings cast in Glasgow and grand teak furniture. East meets west, showing  just how Peranakans took new Malay homes, embraced their Chinese heritage and added a colonial twist. Entry is RM20 and it’s open Monday to Sunday.

A morning exploring the house works up a bit of an appetite, so in keeping with a theme, I went in search of Nyonya cuisine. Influenced by Malay cooking, Peranakan dishes use a lot of the same spices to create curry dishes like chicken kapitan, a dry curry. I opted for a bowl of laksa, popular throughout Singapore and Malaysia, but asam laksa is a Penang specialty. A sour fish noodle soup, it doesn’t sound appetising but it seriously is one big bowl of ‘get in my belly’. It’s made with mackerel, lemongrass, galangal, chillies and a healthy dose of tamarind to give it its sourness. 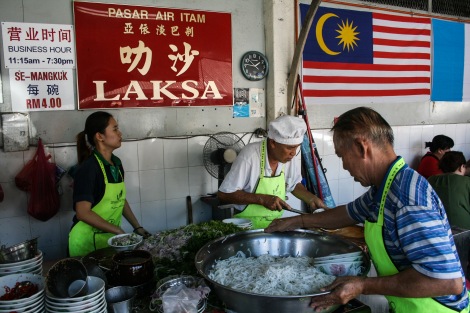 Another food that Peranakans are famous for is cake. Not one to turn down scrummy baked things, I gave them a go. Kue, or kueh, come in all flavours and all shapes. Ang Ku Kue, or red tortoise cake, is a sticky rice pastry stuffed with sweet things like mung beans, which is dyed red and molded in to the shape of a tortoise shell to symbolise longevity and prosperity. In fact, a lot of the cakes here are made to accompany festivals or take on significant symbolic meaning. Another must-try Peranakan desert is apom balik, little round balls of pancake batter flavoured with coconut milk fried in what looks like an egg poacher on the side of the road. 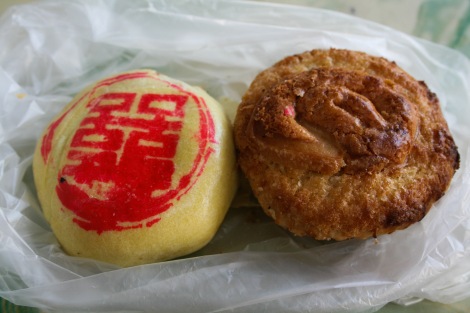 But even if you don’t want to visit a museum or spend all day sampling curries and cake (not a problem here) then you can still see Baba Nyonya influences just by strolling through Georgetown, or any part of Penang. From brightly coloured shop fronts and intricately designed tiling, there are elements of Peranakan art and design everywhere. Each step reveals something new that you can’t quite place in either Chinese, Indian or Malay culture. Peranakan has its own special place. Its called Penang.

For more on my adventures around Malaysia, including tea picking in the Cameron Highlands, take a look over here.

3 responses to “A guide to Peranakan art, museums and food in Penang Georgetown”