Thinking about volunteering whilst you’re travelling or on a gap year? Choosing the right programme and organisation can be difficult. But the rewards can massively outweigh the hours of research it takes to find the right match.

Back in 2013, I decided that whilst I was backpacking around Asia that I would take the opportunity to visit the South Pacific. But I didn’t just want to sit on idyllic beaches and stay in fancy resorts (although there was plenty of that too – see the photo of he island of Leluvia below) so I decided to volunteer with Think Pacific in Fiji on their five week course.

I flew in to Nadi Airport and stayed the first night in Smugglers’ Cove. After a pretty long journey from Auckland and having spent just under four weeks living in a van, I was looking forward to a real bed! That first evening we had a brief introductory meeting with the expedition leaders who would take us out to Gau, an island off the east coast of Viti Levu (Fiji’s mainland) and to the village of Levuka-i-Gau, my home for the next month and bit. It was also an opportunity to meet the other volunteers – a mixture of ages, mainly British with a few Aussies – and the usual chat ensued “Where are you from? Where have you been travelling?” etc. It was also my first and last Fiji Gold beer for the short-term, as alcohol is strictly banned during the project.

The crew, bleary eyed early in the morning at Nadi airport

Group photo upon arrival on Leluvia

An early start the next morning and we headed off to Fiji’s capital, Suva, to pick up supplies – lunch, reef shoes, traditional bula shirts and dresses – before catching the boat to Leluvia where we’d spend the first few nights getting to know one another and finding out more about the expedition.

It was tough staying here, but we managed!
When we finally made it to Gau, we were prepared for the worst. During our briefing on Leluvia we’d been told that there might not be any running water, flushing toilets, we’d probably all contract some kind of vomitting bug and we’d have to sleep on the floor in the same room as our Fijian family with almost zero privacy. But this didn’t seem to phase any of us; it was precisely why I’d signed up and we were all eager to enjoy the experience, no matter what this meant. 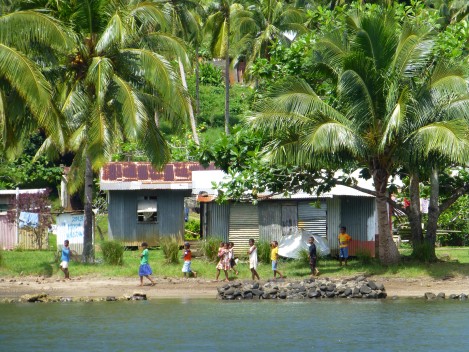 In reality, the village and the Fijian families – our mum (na) and our dad (ta) – were beautiful. We had flushing toilets and although my shower was a standing pipe in the middle of the rugby pitch that also doubled as the kitchen sink, at least I never missed try! The people of Levuka-i-Gau went above and beyond to make us feel welcome and at home, offering us beds, copious amounts of tea and custard pie as well as doing our washing for us – which after a day on the building site was no easy task!

My Fijian family outside our home

The local shop and Tang supplier

It’s difficult to put in to words how much of an impact my time on Gau had. I tried almost everything, from teaching the cutest kindegarten kids ever (toothbrush club being one of the highlights of the day) to emptying the septic tank of rain water (and frogs) each morning so that we could finish building a toilet block for the village. I learnt that I’m pretty handy with a breeze block and a trowel, that I actually do like small children (even if ‘down by the jungle’ and other annoyingly catchy songs drive you a little bit scatty) plus so much more. 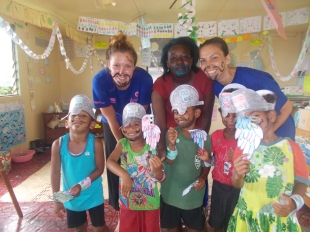 Learning some hard lessons at school

Smiles all round at kindi

I found my new calling!

Getting the logo painted on the side of our toilets

Celebrating our success at completing the build

Getting to work on our toilet block

The villagers were warm and friendly, you couldn’t go past a house without hearing cries of ‘bula!’ and invitiations to tea – some of the Aussie lads even made it a mission to go on a tea and cake crawl, stopping at every home for refreshment. I also got the privilege to experience parts of Fijian culture, like the ‘grog’ ceremony, a traditional drink made from the dried ground up root of the kava crop which is added to water and drunk from a coconut shell. I even made my own kava bowl – hollowing out a coconut shell with a shard of glass took  a lot of patience! Grog tastes like antiseptic lotion and makes your mouth numb, but we loved sitting in the community hall every evening downing ‘tsunami’ measures while Pastor Joe (the village priest) belted out ‘the animal song’ or a few hymns. At the end of the project we gave a performance to the village, the traditional meke or dance, which for the boys involved grass skirts and playing savage warrior, whilst the girls were adored with flower garlands and took part in dancing and drumming.

Basket and bracelet weaving with the women of the village

We went on a difficult trek, but we’re rewarded with this stunning view over Gau

Each week we sent off blog updates for the Think Pacific website. Read about some of our experiences from other team members here.

Picnic on the beach

Cooking with the traditional lovo

Swamps going in for the try!

The guys from Think Pacific were amazing. I was given plenty of info before I left the UK, invitations to Skype and even an invitation to a face-to-face meeting in Leeds. In Fiji the project leaders were brilliant – their door was always open if you needed to talk about anything, from feeling homesick to dressing wounds. At the end of the project we had a de-brief to raise any issues we had and to give feedback on the project.

My time volunteering in Fiji was one of the best experiences I’ve ever had. I’ve made some terrific friends and have the memories of this beautiful county to treasure. 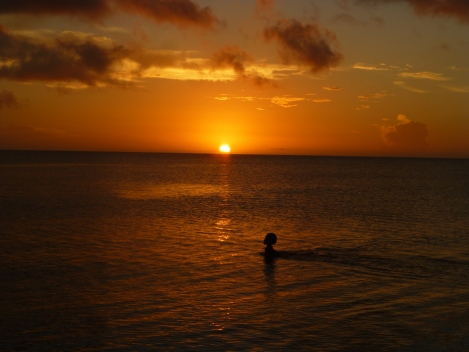 10 responses to “Review: Volunteering in Fiji with Think Pacific”