Short on time in Thailand’s capital? Want to avoid temple fatigue? You might want to read on.

Almost 95% of Thailand is Buddhist, which might explain why there are more than 40,000 wats in Bangkok in total (around 30,000 are still operational). Even if you had a year in the Thai capital I reckon you’d never get through  them all! Would you even bother trying? Temple fatigue is real. Too many gold Buddhas one after the other and they can all start to blend in to one, or at least in my experience. There is a way to spread them out, to take your time over your visits, so that you fully appreciate the wats’ beauty and tranquil surroundings. But not all of us have the luxury of being able to spend so long in one place, so if you’ve only got time for a handful of Bangkok’s best temples, give these a shot to start with:

Famous for: Being the Temple of the Emerald Buddha
Located on the same complex as the Grand Palace, you can kill two birds with one stone here and see two significant sights. Carved from one single block of jade (not emerald) this Buddha has definitely put in the miles: first discovered in Chang Rai in 1464, it’s been moved between Chang Mai, Luang Prabang and Vientiane, before finally coming home to the Grand Palace in Bangkok. Also check out the murals which tell the story of Buddha’s early life.
Na Phra Lan Road. Open daily: 8:30am – 4:30pm. Entrance: 400 baht. 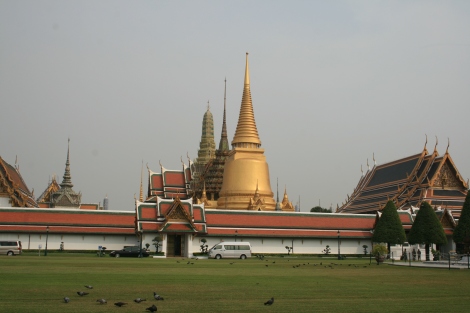 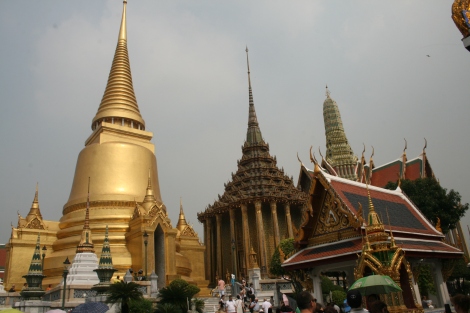 Famous for: Having Thailand’s biggest reclining Buddha
Pop next door from the Grand Palace to Wat Pho, home of Thailand’s largest reclining Buddha, at 46 metres long. That’s a whole lot of gold leaf, and its feet are inlaid with mother-of-pearl. Feeling weary already? Then swing by Thailand’s most famous massage school, based in Wat Pho – masseurs have been training here since 1955. If you’re just passing through Bangkok then you’ll only have time for a short massage, but they also offer massage full and part-time courses here as well.
On Sanam Chai and Maharaj Road, next to the Grand Palace. Open daily: 8am – 5pm. Entrance: 100 baht.

Famous for: Its marble
This royal monastery is one for the architects, made almost entirely from Italian marble, it’s a blinding sight in the bright midday sun. Built in 1900 by King Rama V, this became his shrine and his ashes are buried inside. Its other claim to fame? This temple is the one you’ll see on the five-baht coin.
69 Nakornpathom Road, Dusit. Open daily: 8:30am – 5:30pm. Entrance: 250 baht.

Famous for: Its distinctive spires
Set on the west bank of the Chao Phraya River, this traditional khmer-style temple is a great spot to catch a sunrise or sunset – with a name that translates to ‘Temple of Dawn’ you’d kind of expect that…Its famous spires (or prang) can be seen from afar and beautifully reflect the early morning or late evening light. Being located right across the river from Wat Pho, there’s the option to take a ferry from Sapphan Taksin (or Tha Tien) pier straight across to Wat Arun, although the best place to get a photo of it is from the Grand Palace side.
34 Arun Amarin Road. Open daily: 8am – 5pm. Entrance: 100 baht. 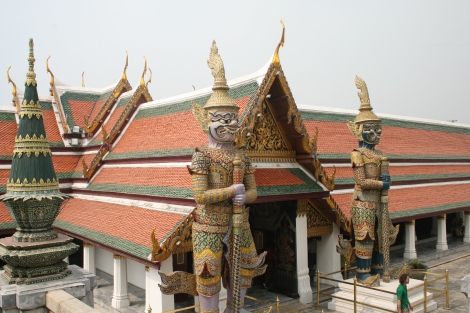 Famous for: Having the world’s oldest solid gold Buddha
This wat houses one of Thailand’s most important treasures. It was discovered in the 1950 by workmen who dropped the statue, which was at the time was encased in a plaster shell. The casing cracked open to reveal this hidden Buddha – it had been disguised year ago, apparently, to protect it from raiding Burmese troops.
661 Tri Mit Road, Samphanthawong. Open daily: 9am – 5pm. Entrance: free, 10 baht for the museum.

(This isn’t that Buddha, but it’s bloody difficult to get in and get a good shot of him!)

I’ve got more tips about what to see and do in Bangkok, as well as the rest of Thailand, this way…

*All photos are my own. Prices right at time of publication.

There was an error retrieving images from Instagram. An attempt will be remade in a few minutes.