Arriving in the sleepy town of Vieng Xai it’s hard to imagine that these ramshackle houses and towering limestone karsts were once an important target for American bombs and the Pathet Lao’s headquarters during the ‘Secret War’. Vieng Xai is more than just a day trip in northern Laos, it’s a time portal.

If you’ve been to Laos you’ll have noticed the pockmarked landscape, the bomb casings turned flower gardens and perhaps even visited the UXO (un-exploded ordnance) information centre in Luang Prabang. But before I travelled to Laos I was unaware of American bombing in this part of Southeast Asia. Despite having studied the Vietnam War, Laos’s role in the story is often left out of the classroom here in the UK, and so the country’s story remains relatively unknown in this part of the world.

The US conducted a ‘Secret War’ on Laos in the 1960s and early ’70s, in order to prevent Vietnam – with the help of communist political organisation the Pathet Laos – gain control in the region and spread communism westward. In the nine years between 1964 and 1973 there were 580,000 bombing missions conducted on Laos, and two million tons of ordnance dropped on the country.

Laos is the most heavily bombed country per capita in history (source: MAG).

The Pathet Laos, under the tutelage of the Vietnamese troops, moved to Vieng Xai (the Hua Phan Province, northern Laos) to set up their headquarters and build a ‘hidden city’, a warren of underground caves, for almost 20,000 supporters, including the politburo’s leaders . Their former base, where they planned and plotted against American forces and the Royal Lao Government, is today a museum. 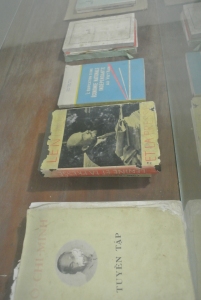 Vieng Xai is a quiet town, not too dissimilar to Vang Vieng twenty years ago I’ve been told. The main attraction? The vast network of caves that spread far and wide beneath the dramatic, tree-covered karsts that surround. Lots of people turn up for the day from Sam Neua (regular local buses run this route and it takes about an hour) but I wanted to stay overnight and not rush Vieng Xai, to appreciate its significance and cycle through more of northern Laos’s lush, HD-green landscapes. But first, the caves…

The only way to see the caves are with a guided tour, but you’ve got to hire a bike (motor or push) before you join a group. Bike rental is cheap, and I’d recommend getting a motorbike if you can as it gets pretty sweaty cycling between caves – they cover some distance! If you fancy taking a more leisurely pace and getting around on your own steam then you can rent bikes from the information centre (10,000 kip for the tour, 20,000 kip for the whole day).

Once you’ve got your wheels you’ll be handed an audio guide – an essential piece of kit. The speakers bring history to life and give plenty of interesting facts about the caves, plus if you’re too busy gawking to listen to the tape you can always rewind and pause to get the info at your own pace.

The caves are incredible – if walls could talk (then there’d be no need for stupid clichés) I’m sure this place would have a lifetime of stories to tell. See the city’s hospital, printing press, the bedroom of  Kaysone Phomvihane, head of the Laos communist movement, plus a theatre where everyone attended Friday night movies, all underground! It’s moving to think of the 20,000 people living here, most of the time in darkness below ground, so impassioned by their cause that they’d rather endure this ordeal than abandon their beliefs. History geek or not, the caves are well worth the kip and were another trip highlight for me. Learning about Laos’s complex history from this very human perspective was brilliant – I’d say that touring the caves was on par with similarly unforgettable experiences, like visiting Phnom Penh’s Killing Fields. And if you do fancy sticking around in Vieng Xai to relax then there’s plenty of cycling to keep you busy. 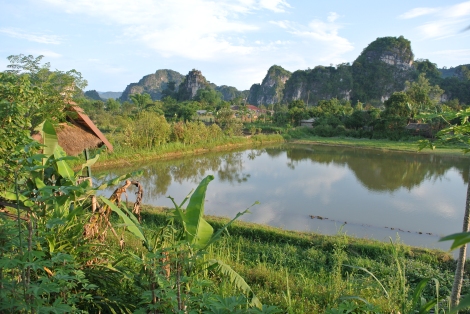 Tours run every day at 9am and 1pm and last about two and a half hours. The full package (guide and audio tour) costs 60,000 kip, but this doesn’t include bike rental.

How do you get to Vieng Xai?

By bus from Sam Neua it takes 45 minutes to an hour. The bus from Luang Prabang takes a grueling ten to twelve hours, that’s without stops, on far bumpier roads than you’re used to – protect your posterior and your sanity by breaking the journey up with a night in Phonsavan and check out their mysterious ‘Plain of Jars’. If you’re coming across the border from Vietnam then the bus will take about nine hours, crossing over at Na Meo and Nam Xoi, which is a fairly calm checkpoint.

Where should you stay in Vieng Xai?

You don’t get much choice  (there were only a handful of guesthouses and hotels when I was there in 2014) and they’re all fairly similar, but you’ll pay more for a private bathroom. I stayed at Xailomyen Guesthouse (also known locally as the Chinese Hotel).I hadn’t pre-booked accommodation and arrived late at night, hungry and tired – this place had a decent restaurant and cold beer, as well as clean rooms at reasonable rates. It was a very lucky find, as the food is great, the rooms are comfortable if not a little basic and it’s just around the corner from the only WiFi spot in Vieng Xai, an Indian restaurant…Sat on stilts above the lake, overlooking the soaring karsts in the distance, it’s not a pretty bad view to wake up to!

Read more about my adventures in Laos and get travel advice and trip ideas.

Oh, and don’t forget to sign-up for regular blog posts and features!